‘What else is possible?’ Wounded warriors take up skydiving 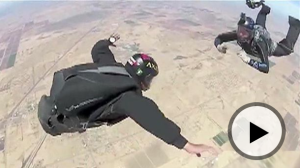 Although an IED attack and severe infection left Army vet Joe Grabianowski in a wheelchair, he never gave up on skydiving.

“I’ve wanted to do it for a long time now. Well before even I was wounded. I’ve had dreams of it, thoughts of it,”Grabianowski told Fox News.”It would be such a goal. If you just achieve it, you’d feel so great about it.”

Grabianowski’s motivation was Todd Love, a Marine Corps vet who lost both legs at the hip, along with his left hand to the mid-forearm.

“Being able to be an inspiration to others, it’s a privilege,”Love said. “It makes it all that much more exciting. You know, cause, if I can simply go out and do what I like to do and inspire others to do what they want me to do, then that – it makes me happy.”

Operation Enduring Warrior is a volunteer group, set up a year ago this month, that introduces high level amputees – who can’t be fitted with prosthetic limbs – to extreme sports, including skydiving.

“We really wanted to help wounded warriors and we took a multifaceted approach to it, so we do things like obstacle course racing, such as tough mudder, spartan races,” said Scott Blough, a member of the all-volunteer team who is still on active duty with the Army .”Just anything to get wounded warriors out and get them active again and show them they can accomplish all of those things that they did before, and more than they did before they were wounded.”

While there are no hard statistics on the number of severely wounded vets skydiving, it appears to be on the rise. “I think a lot of the disabled community,especially injured veterans, are drawn to skydiving because it’s starting to grow,”Love said. “Veterans are perfect for skydiving because it’s a sport you have to plan and military guys — they know how to plan properly – and in skydiving if you can do that, you can eliminate a lot of the risk.”

Grabianowski trained at a wind tunnel in Arizona, learning to balance despite missing both legs. Then he moved on to tandem jumping, before going solo.

“For me it felt exhilarating,”Grabianowski said. Like anyone else, he was a little apprehensive when it came time to go out of the airplane door — but it was worth it. While he can’t walk, during free fall, he said, he felt liberated from his injuries.

“Just that freedom of movement out there,” he said. “You’re free falling but in a way, you can move your body in certain ways to actually make it feel like you’re flying.”

Love said the experience was mentally healing. “You know, it’s silly that I put a limit on myself and thought that I couldn’t do it or believed that I couldn’t. And then to look back, I was like wow, I totally, like, put a barrier that I couldn’t cross and then I ended up crossing it and I think, what else in my life am I doing that with?”

“Last October I got to jump with Todd,” Blough said. “And I’ve pushed Todd in wheelchairs, I’ve carried Todd in races in a backpack”

But skydiving, he said, was a surprising equalizer. “You put him in the air with me and we go flying together and jump together and he can move as well as, or actually can jump better, than I can.”

Drop zones and wind tunnels in Arizona, Texas and North Carolina are donating training and jump time. It’s about paying it forward, how one vet can inspire another.

“Joe saw Todd skydive and realized, hey I can go do that,” Blough said. “And now there will be somebody who sees Joe skydive in these videos or sees Joe here on Fox News and it will absolutely transition them into thinking: I can do that.”

Grabianowski is out of Walter Reed, and looking for work helping other vets in the DC area. He recently turned down a custom home to accommodate his disabilities because he wanted to earn it on his own.

Both he and Love said skydiving is a confidence builder.

“It makes me wonder what else, what else is possible?” Love said.

Catherine Herridge is an award-winning Chief Intelligence correspondent for FOX News Channel (FNC) based in Washington, D.C. She covers intelligence, the Justice Department and the Department of Homeland Security. Herridge joined FNC in 1996 as a London-based correspondent.