Operation Enduring Warrior – Skydive is a non-profit organization that works to empower wounded veterans by helping them to achieve Extreme Goals. Operation Enduring Warrior has seen a number of inspiring veterans welcomed into our sport and skydiving family. Most of us have seen the inspiring images of Todd Love and other wounded warriors that have gone through AFF training and continued to become licensed skydivers. Axis Flight School has been a big part of this training, and has helped these wounded warriors to fulfill their personal goals of becoming licensed skydivers. We sat down with lead FS coach for Axis, Brianne Thompson, to better understand the challenge of choosing the appropriate canopy for these new skydivers.

“As with all things, there is a learning process. We take our best educated guess, try it, then assess the next best course of action. In some cases, you wing it. In the case of the Spectre 170, when it was first sent to us for Todd Love, I was a little bit concerned that it would be too small. I was expecting a Navigator 200. I tend to be on the conservative side of things, and putting a student, regardless of their size or body shape, on something below a 200 seemed a bit out there. Granted, it was a complete emotional response; I had no scientific evidence of that being bad, just that “we’d never done that before”. Dangerous words, to be sure. So, when the Spectre 170 came I was a bit skeptical, but Nik felt confident that it would be awesome. He did a test jump and we agreed that shorter brake line length would be critical in order to preserve the arms and hands of Todd. We needed the canopy to flare at or above his belly button, rather than past his hips. Once the brake lines were shortened, we were ready to go. Todd did his first couple landings with the confidence of someone who had done that before, and as someone constantly trying to learn their canopy. It was actually pretty exciting to watch.

The landings were soft and forgiving, but the power of the Spectre had yet to reveal itself. After several jumps, Nik figured it would be time to follow Todd under canopy in order to get some pics. Nik jumped the Pulse 190, thinking that that had more glide and size than the Storm and he would be all set. What was amazing was that because of Todd’s lack of legs, it affected how he hung in the harness and it directly affected the glide of the canopy.

Todd sat in the harness much like a paraglider pilot: he reclined in the harness. With the combination of the recline, and the lack of drag on his legs, the Spectre had more glide than the Pulse! A surprising amount more.

The Spectre’s powerful, yet forgivable flare was the other big keeper. The Spectre allowed the students to correct mid-flare, rather than having to commit to the process and hope for the best. We all want soft landings for our students, but we must confess, it seemed even more critical for these students because Todd and Joe had no landing gear. Their landing gear is their seat/tailbone and spine. The Spectre offers a flare that allows the student to adjust and correct, mid-flare, with good response from the canopy, yet without an adverse affect. As the students grow and evolve, it will be important for them to try other canopies. Their canopy skills will evolve just like their freefall skills, and it will be important for us to foster those changes. But, during the learning process, the Spectre seems to be the most forgiving canopy for the wing loading and body style that these students have.” 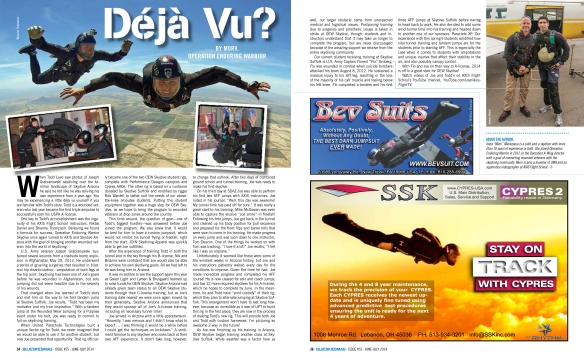 ‘What else is possible?’ Wounded warriors take up skydiving

Although an IED attack and severe infection left Army vet Joe Grabianowski in a wheelchair, he never gave up on skydiving.

“I’ve wanted to do it for a long time now. Well before even I was wounded. I’ve had dreams of it, thoughts of it,”Grabianowski told Fox News.”It would be such a goal. If you just achieve it, you’d feel so great about it.”

Grabianowski’s motivation was Todd Love, a Marine Corps vet who lost both legs at the hip, along with his left hand to the mid-forearm.

“Being able to be an inspiration to others, it’s a privilege,”Love said. “It makes it all that much more exciting. You know, cause, if I can simply go out and do what I like to do and inspire others to do what they want me to do, then that – it makes me happy.”

Operation Enduring Warrior is a volunteer group, set up a year ago this month, that introduces high level amputees – who can’t be fitted with prosthetic limbs – to extreme sports, including skydiving.

“We really wanted to help wounded warriors and we took a multifaceted approach to it, so we do things like obstacle course racing, such as tough mudder, spartan races,” said Scott Blough, a member of the all-volunteer team who is still on active duty with the Army .”Just anything to get wounded warriors out and get them active again and show them they can accomplish all of those things that they did before, and more than they did before they were wounded.”

While there are no hard statistics on the number of severely wounded vets skydiving, it appears to be on the rise. “I think a lot of the disabled community,especially injured veterans, are drawn to skydiving because it’s starting to grow,”Love said. “Veterans are perfect for skydiving because it’s a sport you have to plan and military guys — they know how to plan properly – and in skydiving if you can do that, you can eliminate a lot of the risk.”

Grabianowski trained at a wind tunnel in Arizona, learning to balance despite missing both legs. Then he moved on to tandem jumping, before going solo.

“For me it felt exhilarating,”Grabianowski said. Like anyone else, he was a little apprehensive when it came time to go out of the airplane door — but it was worth it. While he can’t walk, during free fall, he said, he felt liberated from his injuries.

“Just that freedom of movement out there,” he said. “You’re free falling but in a way, you can move your body in certain ways to actually make it feel like you’re flying.”

Love said the experience was mentally healing. “You know, it’s silly that I put a limit on myself and thought that I couldn’t do it or believed that I couldn’t. And then to look back, I was like wow, I totally, like, put a barrier that I couldn’t cross and then I ended up crossing it and I think, what else in my life am I doing that with?”

“Last October I got to jump with Todd,” Blough said. “And I’ve pushed Todd in wheelchairs, I’ve carried Todd in races in a backpack”

But skydiving, he said, was a surprising equalizer. “You put him in the air with me and we go flying together and jump together and he can move as well as, or actually can jump better, than I can.”

Drop zones and wind tunnels in Arizona, Texas and North Carolina are donating training and jump time. It’s about paying it forward, how one vet can inspire another.

“Joe saw Todd skydive and realized, hey I can go do that,” Blough said. “And now there will be somebody who sees Joe skydive in these videos or sees Joe here on Fox News and it will absolutely transition them into thinking: I can do that.”

Grabianowski is out of Walter Reed, and looking for work helping other vets in the DC area. He recently turned down a custom home to accommodate his disabilities because he wanted to earn it on his own.

Both he and Love said skydiving is a confidence builder.

“It makes me wonder what else, what else is possible?” Love said.

Catherine Herridge is an award-winning Chief Intelligence correspondent for FOX News Channel (FNC) based in Washington, D.C. She covers intelligence, the Justice Department and the Department of Homeland Security. Herridge joined FNC in 1996 as a London-based correspondent.

Over the past couple of weeks a U.S. Army veteran and wounded warrior, Joseph Grabianowski, learned to skydive in Eloy, Arizona. Joe is a story of survival, triumph, and courage that has already inspired thousands. After sustaining wounds from a roadside bomb blast in Afghanistan on May 29, 2012, Joe underwent a grueling series of surgeries that concluded with him becoming one of the highest-level amputees at Walter Reed.

Now Joe has set his sights on new personal goals, one of which is learning to skydive. “I’ve always wanted to skydive even before I got wounded in Afghanistan…” said Joe, “I always wanted to achieve goals that would test me to my mental limits. Yes, it is a goal that is worth achieving because not a lot of people can do this. When I was in the hospital ward at Walter Reed I started thinking about being involved in skydive tandems only for the rest of my life based on my wounds and amputations. That all changed when I discovered Todd Love’s story and the things he was doing.”

In June 2013, a non-profit organization called Operation Enduring Warrior (OEW) teamed up with AXIS Flight School and Skydive Arizona in training another wounded warrior, Todd Love, to skydive on his own. Todd is a U.S. Marine Corps veteran and a triple amputee with similar lower extremity injuries as Joe. In addition, he lost part of his left arm below the elbow. Todd has been the driving force behind the OEW Skydive program. After earning his A-license last summer, Todd has continued to jump and now has 75 jumps under his belt.

Joe learned about Todd’s story in 2013, “he was skydiving on his own already and that opened great opportunities once again that I myself may follow. Todd had similar amputations as I have you see. Todd has been my motivator and my true inspiration.”

Joe is now 13 jumps into his skydiving training. He has performed exceptionally both in freefall and under canopy. Joe will continue his training at Skydive Arizona in the near future with a goal of earning his A-license by that date. 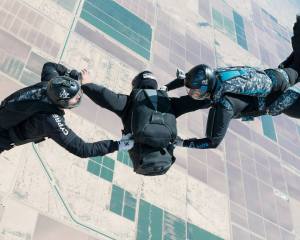 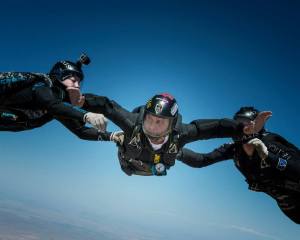 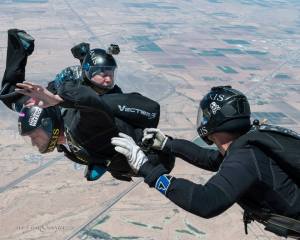