Mike Hall jumps with the American flag while the sun begins to set at Skydive Arizona in Eloy. 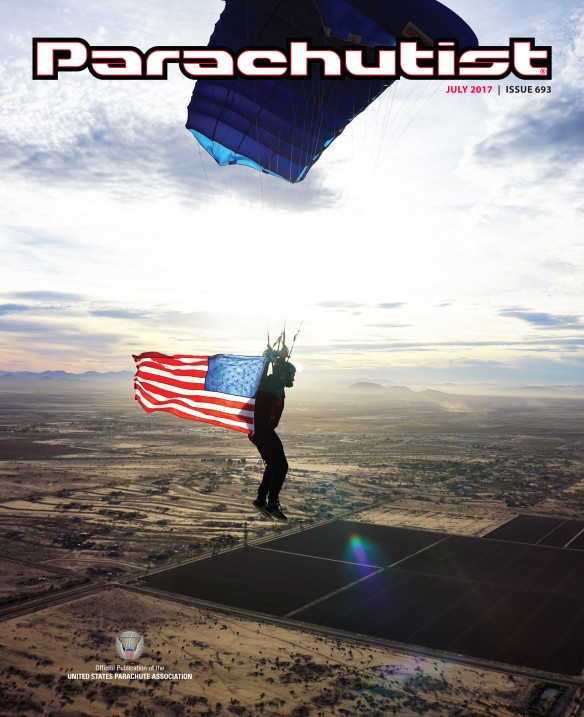 Brianne Thompson and Niklas Daniel of AXIS Flight School traveled to Skydive Suffolk in Virginia for the second year in a row, to organize at the 4th of July Boogie. From July 1st – 4th, jumps were made from both … Continue reading →

Posted on 03. May, 2016 by Parachutist online. Words by MURV, Photos by NiklasDaniel.com.

The Operation Enduring Warrior Skydive program began in 2013 (it was then called Operation X-Wing) to facilitate initial skydiving training for combat-wounded veterans. Since then, nine students have earned their A licenses through the program. But just like other recently A-licensed skydivers, many OEW jumpers came off the high of reaching this milestone and found themselves asking, “What’s next?” The world of skydiving is so full of possibilities for new jumpers that deciding what path to take can be overwhelming.

To figure out how to best encourage graduates to continue to learn, have fun and make wise decisions, OEW asked its alumni what kept them interested in the sport and coming back to their drop zones on weekends. From these interviews, OEW organizers learned that the new jumpers needed to feel comfortable in their home drop zones’ environments and that relationships with local jumpers played a big role in whether an adaptive skydiver chose to call a particular DZ home. So OEW decided to start a mentorship program to help graduates maintain currency and proficiency while beginning to explore different disciplines in the sport.

There’s No Place Like Home
OEW-program hosts Lone Star Parachute Center in Luling, Texas; Skydive Arizona in Eloy; Skydive Paraclete XP in Raeford, North Carolina; and Skydive Suffolk in Virginia are very supportive of the program and its adaptive athletes. However, after initial training, graduates often find themselves without a familiar drop zone close to home. Todd Love, a triple amputee who began skydiving in 2013 and is OEW’s first graduate, said, “I look for how accessible [a drop zone] is. If it’s not, then the only way I’m going is if I have a good friend who can help me out with all the logistics of skydiving as an adaptive athlete. It can be a bummer going to a drop zone that doesn’t have a bathroom I can use.”

Love also shared his thoughts on selecting people to jump with: “I always try to choose other skydivers who can have a positive ability on my own skydiving capabilities. I look for people who are professional not just in skydiving but … about everything they do. It sounds silly, but watching how people drive their cars, how they eat, how they speak or how they listen are all very revealing of their states of mind. There may be hints in their habits on the ground that may foreshadow their behavior in the air.” Love emphasized the need to find good communicators to jump with and added, “If there is a lack of communication, then step up and be the voice that can bring clarity to the plan of the skydive.”

Finding a Mentor
Along with the feedback OEW received from interviewing its graduates, it also had a chance to witness the positive effect of mentorship first-hand. When Tyler Anderson, a 2015 graduate of the OEW program at Paraclete XP, attended a B-license canopy course through AXIS Flight School at Skydive Arizona, he brought along his mentor, Justin Avila. (Recognizing that canopy control goes hand in hand with avoiding injury and staying in the sport, OEW recently began offering B-license canopy training for its graduates.) Anderson met Avila—a fellow wounded veteran with more than 500 jumps and a Coach rating—through school outside of the OEW program. At the canopy course, the OEW staff recognized that Avila’s support and guidance was a big part of Anderson’s success at progressing in the sport after earning his A license.

Additionally, Love attended some of Anderson’s canopy classes, providing additional support. Love’s guidance was also useful to new OEW student Donna Bachler. Though at different stages in their skydiving progressions, both Anderson and Bachler commented on the value of having another OEW Skydive graduate and adaptive athlete available to them as a resource.

A single mentor can provide an invaluable support system, as well as guidance and motivation, to a beginning skydiver. For OEW graduates, the most effective formula for achieving skydiving progression and success involved mentorship by fellow veterans. OEW graduates and current students call drop zones all over the United States home. If you’re a military veteran skydiver and would like to be involved with OEW, email skydive@enduringwarrior.org or search for “Operation Enduring Warrior” on Facebook.

About the Author
Iveta “Murv” Muravyeva, D-33208, is a pilot and a skydiver with more than 14 years of experience in both fields. She joined Operation Enduring Warrior in 2012 as Operation X-Wing’s program director with the goal of connecting wounded veterans to the skydiving community. She’s worked closely with AXIS Flight School at Skydive Arizona, as well as the staff of Skydive Suffolk, to develop the program.