Nik and Brianne (AXIS) during the 2-way VFS competition.

This was the the 3rd and final stop of the 2016 IBA (international body flight association) competition tour. The event was streamed live online where anyone could watch the athletes compete in their respective events.

The following words are by the IBA.

The meet kicked off Thursday afternoon with 2way FS, with 4 teams in the #battleoftheblades – from professional skydivers Axis to pick-up team 11-year-old Elijah and Sally. Axis ultimately scored the gold medal, whereupon they decided to kindly donate their winnings to second place winners, Team Squared, a pair of teenage twins out of iFLY Sacramento.

2way VFS, the 3-time most popular event at IBA meets, where 17 teams competed across all 4 classes. Team Blue Knees won Rookie with a 16.5 average, Intermediate gold was captured by Brad & Stryker with a 15-point lead, Advanced was won by Natalie & Leecoming in with exactly 100 points after 6 rounds, and Open was nabbed by the indisputable champs Josh & Mikey of Collective. Collective also took gold at the Rosemont meet, however their total increased by an impressive 42 points in Seattle.

AXIS completed the 2-way VFS discipline with a 23.5 average, while Arizona X-Force finished the 4-way VFS category with a 20.75 average.

For all competition scores, please visit the In time scoring website. 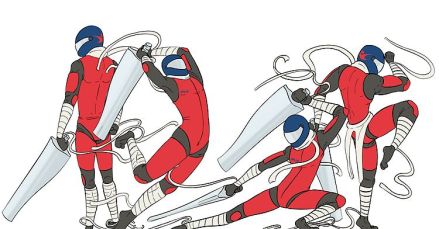