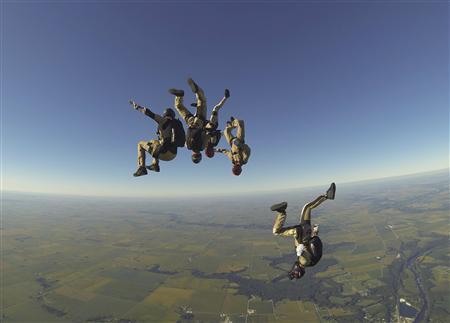 (Reuters) – Professional skydiver Brandon Atwood has a strange but essential job while hurtling toward Earth at more than 100 miles per hour: He points a video camera attached to his helmet back up toward the sky while his teammates execute a complex aerial routine.

Without Atwood’s contribution, none of the spectators on the ground would be able to see the Arizona Arsenal’s winning performance in the four-person vertical formation event at the U.S. National Skydiving Championships earlier this month, 80 miles southwest of Chicago.

In competitive skydiving, all the action takes place thousands of feet above the ground – too far away for the naked eye to see.

That is a problem for the sport, which has struggled to attract attention while other extreme sports – skateboarding, surfing, BMX biking and snowboarding – have an ESPN television contract for the “X” Games and draw legions of fans.

“As skydivers, we think what we do is the coolest thing ever, but other people see it differently,” said Nancy Koreen, director of sports promotion for the U.S. Parachuting Association.

There were no corporate sponsorships or prize money at the national championships, and the 10-day event drew only a small crowd at the “drop zone” to watch more than 600 skydivers compete in Ottawa, a town on the Illinois River.

“I’m an unemployed professional skydiver,” said Atwood, 35, who finances his passion in part by organizing and training new skydivers in exchange for free jumps.

The success of the Arizona Arsenal team can depend on how well Atwood is able to video the tricks they perform after jumping out of an airplane at 12,500 feet. Judges dock points if Atwood’s foot or a teammate’s arm blocks the camera view.

At the competition near Chicago, Atwood timed his fall slightly ahead of the team, and craned his neck to get the right angle on his camera as two team members flipped upside down while the other two grabbed their ankles. Then they switched partners before all four joined hands and flipped again. With eight jumps, or rounds, they scored a total of 157 points – a point for each trick. The second place team had 104 points.

“I just (keep) strong with the neck muscles and don’t do any sudden movements with the visor,” Atwood said.

After the skydiving teams coasted to a smooth landing in the grassy area abutting a corn field, their videos were turned over to a panel of judges, who scored the performances behind closed doors in an airplane hangar.

The videos and photos were posted on the association’s website throughout the competition but that was pretty much where the public exposure to the sport ended.

“You could see a little bit from the ground, but not a lot. You could see the landings,” said Mark Baker, who had traveled from Minnesota to watch his son, Tom, in the freestyle event.

Half a million people skydive annually on a “tandem” jump – attached to an experienced skydiver – but only a fraction of those people go on to become members of the association.

While skydiving is considered a dangerous sport, there were only 19 fatal accidents out of 3.1 million jumps last year, according to the association.

One recent safety advance is an electronic device that automatically releases a chute if a diver loses consciousness while falling.

One team at the U.S. championships called itself Eggum Racing in honor of Stephanie Eggum, 32, who was killed at the drop zone in August when her main parachute became twisted and she had to cut it away, but was too low to deploy her reserve chute.

Videographer Atwood took his first dive when he was 16 years old. But it was not until he was laid off from his office job at a real estate company in Idaho that he decided to move to Arizona to pursue skydiving full time.

“It’s about being super comfortable in that extreme environment, knowing you are 100 percent in control of yourself even though you are falling to your death,” he said.