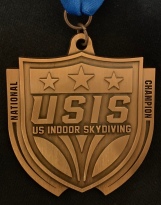 Arizona X-Force had a strong showing with two new personal bests: Highest indoor average of 26.1 points over 10 rounds, and single highest scoring round of 46 points in 35 seconds. Please click here to view the competition videos.

The team’s next major competitions will be the USPA Skydiving Nationals in Reaford, NC at the end of September, immediately followed by the FAI Skydiving World Cup in Eloy, AZ in early October, which the team qualified for at last year’s nationals.

The USIS draws were powered by the AXIS Flight School Draw Generator, which was used for all disciplines (Vertical Formation Skydiving and Dynamic).